This topic from Long and Short Reviews was a tough one, because this is the sort of thing I'm terrible at. I can tell you plenty of things I'm not good at, but my strong points? No chance.

At one point I might have said my imagination, but I'm not sure I can push that at the moment, because lockdown has left me with a severe case of writer's block. I've struggled to get any writing done at all recently - if not for the new plans by my publisher to release my books as audiobooks, I'd barely feel like a writer at all.

So, strong points at the moment?

I'm good at learning new things - I can pick up a wealth of new information quickly.

I have a very high pain threshold - that's what having a chronic pain condition gets you. Someone else's level 10 pain would probably be my level 5.

And, thanks to my introversion, I'm good at being alone. Obviously I live with my husband, so I'm rarely completely alone, but I'm dealing quite well with not being able to go anywhere, unlike many people I know who have been climbing the walls for months.

So what's your greatest strength?

How I take care of my health

Self-care is a topic which is hot recently, thanks to coronavirus locking us all up in our homes, and since I'm not high on the list for a vaccine it's unlikely to change any time soon, so when this topic from Long and Short Reviews came up self-care was the first thing that came to mind.

I'm the first to admit I'm not the healthiest individual. I can't really exercise at the moment as I have a respiratory condition which prevents anything strenuous, and I have to be careful which vitamins I take as some clash with my medication. So for my physical health, there's not a lot I can do other than eat plenty of fruit and vegetables, take my meds and go out for a walk when I can. My husband and I like to go out to local wildlife reserves whenever possible, which at the moment is unlikely as a lot of the nearest ones are flooded.

Taking care of my mental health is trickier. I've been working from home for nearly a year and it takes a toll, even for an introvert like me. I keep a steady supply of books and films and stay in touch with friends as best I can - we've been having Zoom meetings for each other's birthdays and sending memes to each other. It's tough, but I'm soldiering on.

So how do you take care of your health?

Most romantic book or movie ever

After all, what constitutes romantic? I've always been told, for instance, that the romance I write needs a happy ending, but a remarkable number of romantic films (many based on Nicholas Sparks) end sadly. I've been told that Titanic is deeply romantic but the ending is mixed at best.

So, having thought about it, I came up with two possibilities. For films, I went for The Time Traveller's Wife. It holds the crown of being the only romantic film to actually make me cry - I don't do that often, and certainly not for romance. However, I felt the central relationship between the characters was very engaging, and the ending was a little more hopeful than the one in the book.

And honourable mention goes to Emma by Jane Austen, both the book and the Gwyneth Paltrow film, for having the most romantic proposal. Mr Knightley's passionate declaration of love is beautiful, and was sadly ruined in the otherwise excellent recent version by having Emma get a nosebleed in the middle of it.

So what's your most romantic book or film?

A few of my favourite things

This week's topic from Long and Short Reviews was a tricky one since it was so wide-ranging. I have a lot of things which could be considered my favourite, and many change day by day. So what are my favourite things?

First is something I've mentioned a few times on here - horror films. I love all cinema, but am a particular lover of horror and have a very high tolerance for junk, so can watch some really terrible horror and still enjoy it (Mega Shark vs Giant Octopus, for instance). My favourite at the moment is Hell House LLC, which fortunately is available for free on Amazon Prime and also via Shudder.

Then we have two things I can't do at the moment - trying new restaurants and going to rock concerts. I attended a streamed version of a Darkness concert recently, which is likely to be the best I can do for some time. As for new restaurants, I'm using Deliveroo a lot to try new cuisines, although nothing beats trying a new place out in person. 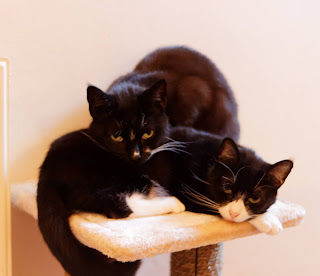 Dash and Spot like to sit behind me and get strokes whenever I need a break from work. They also have remarkably accurate watches, since they know exactly when I'm due to log off and make their dinner.

So what are your favourite things?