How I decide what to read next

I have to admit, I struggled a little with this topic from Long and Short Reviews, because lately the decision of what to read next has almost been made for me.

Because I have so many pre-orders that every time I switch my Kindle on I've got new books recently downloaded, so I always have at least two new ones to get through once I finish the one I'm on.

One thing that determines what I read is who I follow on Amazon - every time someone I like has a new one due I pre-order it, and if I find someone new I enjoy then I work through their back catalogue. I'm currently working on Agatha Christie's Mr Quin stories, having finished all the Marples and Poirots.

And then there are celebrities. I love autobiographies, but am also reading Richard Osman's new novel. If you're wondering how that's going, I've already pre-ordered the sequel, which should tell you everything. I also have Amy Bruni's ghost-hunting book on standby - I'm fascinated by the paranormal, even if I'm on the fence about it.

So how do you decide what to read next?

Take it away, Eleanor...

How to Make the Perfect Halloween

I’ve always been fascinated by Halloween, with it coming just as the nights get dark and the days become shorter. In England, less than a week after Halloween we have Guy Fawkes’ Night, where we light bonfires and let off fireworks, and it’s part of the run-up to Christmas – and my birthday!

Trick or treating didn’t really exist in England when I was a child, although it’s something that happened a lot in Scotland when my partner was younger. He used to go ‘guising’ with his friends. They would dress up in homemade costumes – my partner said he’d dress up as a tramp or borrow his mum’s clothes and turn up in drag – and tell a joke or a silly story, recite a poem, or sing a song. In return they’d be given sweets. He finds the idea of children knocking on doors and demanding sweets without putting on some sort of show in return rather strange!

A friend of mine at school had a birthday close to Halloween, so one year, when I was ten, she had a combined Halloween-birthday party. I loved it. I’d been reading Jill Murphy’s Worst Witch stories since I was seven, and was ecstatic to be dressing up as a witch. My dad found me a broomstick, and a novelty pencil topper that was a chattering skull, and I borrowed someone’s long black dress. We ran about in the darkened garden, and I enthusiastically participated in my first ever go at apple-bobbing and ended up nearly half-drowned. I had a wonderful time.

Although my birthday’s in December, for my fifteenth birthday I decided to have a horror party to make up for the fact that I couldn’t have a Halloween party. It was fancy dress, so one of my friends turned up with a line of fake blood around her neck with the story that her head had been cut off and reattached. She arrived with another friend carrying a plastic axe from a toyshop, who had fake blood all over her T-shirt. I appreciated the effort that went into it! I went as a vampire, which is entirely the fault of watching The Lost Boys far too often.

I don’t go trick or treating myself, but I do enjoy a good ghost story – I will usually turn to MR James’ work if I fancy a scare. And I like to see people’s houses decorated with cobwebs and spiders and pumpkin lanterns. It would be marvellous to be invited to the Chief Wizard’s Halloween ball, as Aubrey and Trismegitus are in How to Make the Perfect Man, but until that happens, I will just have to imagine how fun that would be!

How to Make the Perfect Man
Published 27 October 2002 by Pride.
Available in ebook.

Needing a date for the hottest Hallowe’en party in town, scientist Aubrey Waldegrave sets to work creating his perfect man. Unfortunately, the Adonis who emerges from his laboratory is a free spirit who has no time for Aubrey’s brogues and tweeds.

Alchemist Trismegistus Nimlet can turn anything into gold, but when his apocathery's alligator starts talking back and his werewolf allergy leaves him sneezing, it looks like Halloween might be a washout. Worse still, is Tris really about to lose the chap he secretly loves to a manmade surfer dude who’s more flash than Frankenstein?

With werewolves leaving fur in the ornamental fountains and a banshee making enough noise to wake the dead, Aubrey’s Halloween is going from bad to worse. All he wanted was to make his perfect man, but what if he was right there all along? 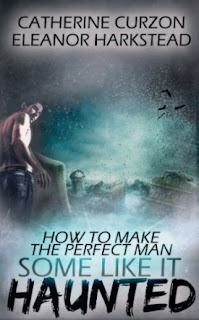 Catherine Curzon and Eleanor Harkstead began writing together in the spring of 2017 and swiftly discovered a shared love of sauce, well-dressed gents and a uniquely British sort of romance. They drink gallons of tea, spend hours discussing the importance of good tailoring and are never at a loss for a double entendre. 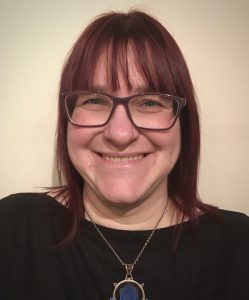 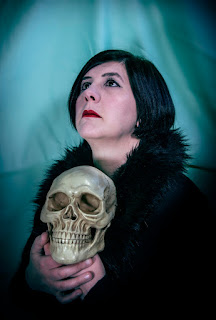 They are the authors of numerous short stories and two novel series, the de Chastelaine Chronicles, and the Captivating Captains, published by Totally Bound and Pride. Their novel The Ghost Garden was shortlisted for the 2020 Romantic Novel Awards.

Find out more at www.curzonharkstead.co.uk

Sign up to our newsletter and receive our free, exclusive short story “Brighton Beaux”. https://curzonharkstead.co.uk/newsletter

Posted by Tanith Davenport at 18:00 No comments: 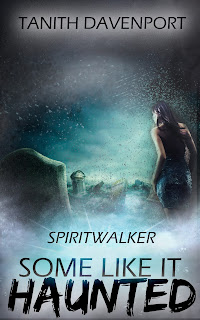 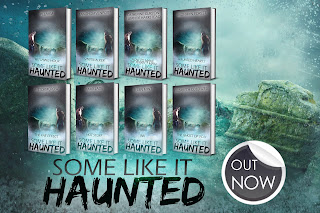 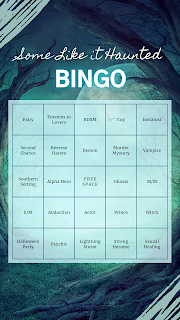 Recipes from my area

I thought long and hard about this topic from Long and Short Reviews. What is a good recipe from my region? And, after much consideration, I decided it had to be Yorkshire puddings. 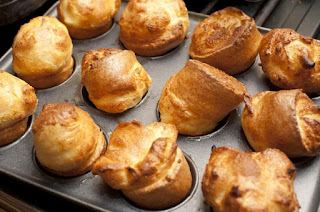 You can make one large pudding or several small ones - my mother used to make it in one large tin, but I personally prefer the smaller ones.

Put the flour into a bowl, season to taste, then stir in the three eggs.

Whisk in the milk to a smooth batter.

Chill in the fridge. We usually did this for about an hour.

Heat the oven to 220C. Take a 12-hole muffin tin, pour the oil into the holes and heat in the oven for about five minutes.

Add the batter mix to the tin and bake for 30 minutes.

If you're making one large Yorkshire pudding you can also make something on the side, such as mince or a stew, to put inside the pudding after it's cooked, but I prefer to have these by themselves. They go great with a roast beef dinner.