Today I'm promoting Victoria Blisse's new self-published book "Proving Santa Exists". I'll be downloading it to my Kindle straight away and, after reading the hot excerpt below, I hope you all will too!


When Jonathan transfers from the U.S to the Manchester branch of Computers Inc., Jenny is the first person to make him feel at home. Finding out about his bleak Christmases as a boy, she makes up her mind to involve him in all her English Christmas traditions.

Passion sparks between the two as they decorate the Christmas tree. Who would have thought such an innocent activity could become so sexually charged? Can Jenny succeed in seducing the hot American and also prove to him that Santa really does exist?
Excerpt.

"How are you enjoying your Christmas so far?" I ask, the film credits fading into the background.
"It's been amazing," Jonathan enthuses as his eyes meet mine, then a serious shadow darkens their flame. "Christmas was never anything special when I was a kid. We never had a tree. The home said it cost too much and it was a fire hazard."
I tut and shake my head.
"The highlight was the Santa. We knew he wasn't real, just a man dressed as Santa. He'd bring each of us a toy. I got a little car one year. I still have it."
"How come you knew it wasn't the real Father Christmas?"
"Because we knew there was no real Santa. They told us so all the time. They told us not to get our hopes up because Santa didn't exist and wouldn't bring us what we wanted on Christmas Eve."
“What?" I'm outraged. I feel my blood boiling with the harsh cruelty of it. "Santa does exist."
"You don't believe that, do you?" He shakes his head, his eyes wide.
"Yes, yes I do." I nod my head emphatically. "Maybe not in the way a child does, but I heartily believe in the spirit of Father Christmas. I believe in the meaning behind the make-believe. My faith is in the giving, which is the true centre of the festive season—the heart of it all. It's all about making life better for other people and, through that, enhancing your own life. Santa definitely exists."
Suddenly, those lips are on mine again, and his arms wrap around me. I feel his cheek against my skin. I feel moisture there: the trail of a tear. I close my eyes and kiss back, giving. I give him the softest, gentlest kiss I can. I want him to feel cherished. My heart throbs in pain at the harshness he’s suffered in his life. I want to smooth over all those rough edges; I want him to see what I mean about Father Christmas existing.
I pull him closer to me. My arms wrap tighter around him, and I stroke his back to offer comfort. Our lips, in contrast, are joined lustfully. With every small move, I feel my heart beat harder and faster. I become dizzy with the speed at which the blood is whizzing around my body, making every inch of me zing with the created friction and heat. His body presses me back against the sofa arm, twisting my own beneath him.
His lips leave mine and kiss a fizzing trail of pleasure down my neck to my collar bone. His hands rise from their position on my hips to slide under my loose-fitting red jumper and up higher to cup my breasts. The shock of his cool hands through the thin, lacy gauze is deliciously arousing. I groan my appreciation as his fingers dig into the cups and ease out the masses of abundant tit-flesh beneath. Pushing the wool of my jumper up with the tops of his wrists, his lips leave the soft flesh at the hollow of my neck.
Moments later, after my jumper is completely removed, their warm wetness encompasses my nipple, sending even more intense ripples of pleasure throughout my body. I feel him shift until he's on his knees in front of me. One of my legs is still on the floor, the other is crossed in front of my pubis. I slip a hand between our bodies, running it under his shirt, feeling that soft, supple skin that I've only just glimpsed before. I follow the soft trail of hair down from his belly button to the top of his jeans. I feel more than hear the moan he emits from around my nipple as I pop open the brass button, then slide down the zipper.
I can't believe I am being so forward, but as he doesn't move to stop me, I yank his jeans and his boxers down to the middle of his thighs. My action emboldens him and he moves back, allowing me to spread my thighs around him. Jonathan strokes down to my legs and pulls up the full length of long, billowing skirt, his mouth still feasting on the white meat of my breasts. A hand of mine rubs through the wiry hair trailing down to his cock. When my flesh touches his, I melt. He's hard and hot and very willing.

Victoria Blisse is a mother, wife, Christian, Manchester United fan and award winning erotica author. She is also the editor of several Bigger Briefs collections, Smut by the Sea and Smut in the City.
She is equally at home behind a laptop or a cooker and she loves to create stories, poems, cakes and biscuits that make people happy. She was born near Manchester, England and her northern English quirkiness shows through in all of her stories.Passion, love and laughter fill her works, just as they fill her busy life.

And this link on Victoria's website covers both links and has a blurb/excerpt for people too:
http://victoriablisse.co.uk/books/blissemas-tales-proving-santa-exists

My Next Big Thing

Last week, my Romantic Novelists' Association friend Nicky Wells tagged me in her post The Next Big Thing - and this week it’s my turn! The idea is that I answer ten questions about my current Work in Progress (my Next Big Thing!) and tag five other writers to tell you about their latest work next week!
So here goes:

What is the title of your book? 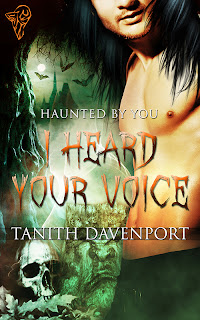 “I Heard Your Voice”.

How did you come by the idea?
I was watching a lot of paranormal entertainment shows and decided to write an investigation where a ghost actually made contact.

Which actors would you choose to play your characters if it were a movie?
I’d have Tom Felton as Jason, Sara Paxton as Tamar and Daniel Craig as Reed. I think he could play arrogant very well.

Will your book be self-published or traditional?
Traditional and e-published by Toral-e-Bound.

How long did it take you to write the first draft of your manuscript?
About four months, give or take.


What is the one sentence synopsis of your book?
Spirits will rise; inhibitions will fall.

What other books would you compare this story to within your genre?
As it’s part of the Haunted By You series by Total-e-Bound, I would compare it to the other three books in the series – they’re all suitably sexy and scary.

Who or What inspired you to write this book?
Watching Most Haunted!

What else about your book might pique the reader’s interest?
It’s got love, hot sex, a mischievous ghost and a woman coming into her own – what more could you ask for?
And that’s my Next Big Thing. Here are the writers I’m tagging...

The wonderful Sage Marlowe, who takes romance to the edge.

And the amazing Bebe Balocca, who shares my love of the Classics.