10 gifts for people who love films

The last topic of the year from Long and Short Reviews, and it was an interesting one. I could maybe come up with one or two gift ideas, but ten? So, since I love films myself, I thought about what I would have liked and the best film-related presents I've received.

A subscription to Shudder. This is a streaming service focused on horror films and is one of my favourites. It's where I discovered the next item on my list...

Hell House LLC. This and its sequels are some of the best horror films I've ever seen. Even if you don't usually like found footage, they're extremely effective.

Heavenly Creatures. Not a horror, but one of my favourite films of all time. Kate Winslet plays Juliet Hulme, one of the two teenage girls who murdered one of their mothers in New Zealand's most shocking murder case of its time.

A multi-region player. Because some of the best films are international and can't be got within my region code.

The Conjuring 1 and 2. Two more of the best horror films of all time in my opinion.

The James Bond Collection. I love James Bond films, despite the obvious misogyny of the earlier ones, and I love being able to dip into them whenever I want.

Sense and Sensibility. I don't only love horror, and Emma Thompson's version of this Austen novel is a classic.

A jar of pork crackling from Snaffling Pig. Well, I don't like popcorn, and I'll need something to snack on during the films. Which also leads to...

A mini fridge. So that you don't have to pause the film to go and get a drink.

Happy Holidays to you all!
Posted by Tanith Davenport at 22:50 14 comments: 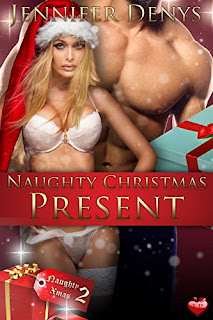 Blurb:
This is a tale of unrequited love . . . but will it be requited by the end? Of course, it will — this is a Christmas story after all!
The question is, how will Gren, a troll and bartender at Pogue’s Bar, prove to the beautiful blonde Siren, Ligia, that he is the man for her? When unexpected circumstances bring them together, he jumps at the chance to give her a special Christmas present and show her that he is everything she needs. Will his present — a session in his personal S&M playroom – be enough? Or could her Siren song cause his death in the process?


The Siren turned her body to lounge back on her elbows, spreading her knees wide in invitation, grinning at him. She lifted one foot to rub it over his stomach, pushing her breasts forward invitingly, while running her tongue over her lips, trying all her seductive tricks.
Little minx.
He swatted her leg way. Gren was sorely tempted but the gleam in her eye gave him pause. He knew she was trying to get him to ejaculate but he wasn’t going to give in to her that easily. Surging forward he dropped the flogger to the floor and with one thick forearm, he pressed both of her legs against her stomach pushing her back on the bench with a thud and delivered several swift hard smacks to her bottom with his other hand.
“Ouch! Gren!” She punched ineffectually against his arm.
“Serves you right.” He stared her down as she struggled to get up. “Stay still. I haven’t finished.”
The Siren subsided. Her expression going from hurt to bemused. She stroked his arm, running her fingers over his bulging biceps. “Okay, lover. What are you going to do next?” Her voice was silky smooth.
He smiled inwardly at her attempt to charm him into doing things her way.
Not a chance, sweetheart.
The troll followed up his spanking by rubbing her hot butt, soothing her while he contemplated his next move. “This is a very tempting position. There are several things I could do while you are on your back like this.”
She guffawed. “I know what I’d do.” She then reached down with her right hand feeling her way until she encircled his cock.
Gren gave her a mock frown. “I could spank you some more. Would you like that?”
Her huff made him smile but the dilation of her eyes told him something different. She let go of him, although her hand caressed his butt instead. “So, tell me what you had in mind.”
“I could get the flogger to finish what I started earlier if you don’t put your hands on the bars.”
The rise of her eyebrow was a challenge and he couldn’t resist chuckling. But at least she did as he commanded.
“Or I could do this.” Ligia’s eyes opened wide as his thumb strayed up to her slit, pressing into her labia. He hadn’t intended doing that, wanting to keep the play to some fun BDSM but the smell of her arousal was so powerful he just had to touch her.
Immediately his cock shot up, his seed threatening to spill and he clenched his jaw, holding himself rigid. Meanwhile, the woman beneath him squealed, lifting her butt up off the bench. She was pressed back down by Gren’s strong arm as her fingers clasped over his bulging muscles, nails digging in.
She shuddered. “Holy Ghost. Don’t stop.”
Gren grinned. He had no intention of ceasing, not yet. This was a heaven-sent opportunity to touch her as he’d always dreamt and he moved his thumb upward to rub her engorged clit.

Posted by Tanith Davenport at 01:23 No comments:

This topic from Long and Short Reviews was an interesting one. I had honestly no idea what my earliest memory was. What sort of things do you remember as a child? What do you want to remember? And I ultimately realised the things I remember most are things with family.

I can remember going with my parents and a friend to visit my Aunt Dora on her farm in the country, helping to feed the chicks and watching the sheep shearing. I had a great photograph of my friend stroking a lamb and looking absolutely shocked, never having seen anything wilder than a cat or dog before.

I can remember going to see my grandad in Dorset, staying in his very old farmhouse and playing with Ginger, a farm cat who ruled the entire neighbourhood and beat the stuffing out of every other animal that ventured onto the property.

And I shouldn't be surprised that I can remember looking out of the car window at Cerne Abbas when my mother (who at that point could still see - she went blind when I was twelve) pointed out and said "Look." And there on the hill was the Cerne Giant. I deliberately haven't included a photo of that out of delicacy, but I'm sure you all know what that looks like...

So what are your earliest memories?
Posted by Tanith Davenport at 22:25 14 comments:

This topic from Long and Short Reviews was easy in some ways and difficult in others, because I have to admit, my favourite men from books tend to be ones I've written myself - I spend a lot of time picturing them and their relationship with the heroine, after all. So forgive me if some of these look like blatant advertising.

Ash Drake of The Hand He Dealt - Ash was my first hero and is still my favourite. A star American football player, he broke through my heroine Astra's image of him as a meathead to capture her heart.

Liam Wilder of Photograph - Not the standard hero, Liam is twenty years older than his wife Azure but is the perfect caring husband, to such a degree that Azure's twin sister Tara wants to steal him - if only at first.

Will Vandenmeer of Ready for Him - My own take on a dominant billionaire, Will is everything Jade needs in a man - strong, considerate and with a taste of hand spanking.

Mr Knightley of Emma - Oh, you thought I'd pick Mr Darcy? I've always preferred Mr Knightley myself. I'm not sure I'd have the patience for Darcy's arrogance.

Sherlock Holmes or Dr Watson - I appreciate that Watson is probably the safer choice here, since Holmes's views on women are not the best (even for Irene Adler) but I have to admit having a fondness for Holmes's intelligence.

So who are your book boyfriends or girlfriends?
Posted by Tanith Davenport at 22:27 14 comments: