What mythological animal I'd want as a pet

I skipped last weeks' Long and Short Reviews topic as I don't listen to podcasts, but this one interested me. I've always liked the idea of having an unusual pet. Growing up I had fish, which were pretty but not especially entertaining, and now I have cats whose primary function is making a mess.

So for a mythological creature, I like the idea of a unicorn. Let's face it, it's basically a horse with a horn, so shouldn't be that complicated to take care of. I used to help a friend with her horse as a child and it was fairly straightforward, although probably expensive. If I was really lucky I'd like one crossbred with a pegasus so I could go flying on its back whenever the mood took me.

Since that's never going to happen, I'm going to put in a mention of one of my favourite Instagram animals, Alfie the Alpaca in Adelaide, because he is also an animal I would love to have. While you would probably be shocked to see a unicorn in my back garden, would you be any less shocked to see an alpaca?

Posted by Tanith Davenport at 23:31 8 comments:

Today I am very happy to reveal the cover for my upcoming novella "Hyperventilating". It's the first book in the "Rock My World" series and will be out on pre-order on May 10th. 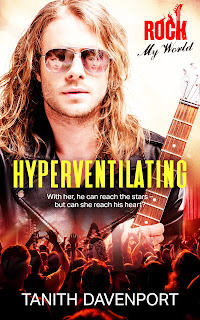 With her, he can reach the stars – but can she reach his heart?

Amber Blake is fleeing a terrible betrayal in her past by touring with rock band Puppetmaster as a make-up artist with her best friend Elyse. Knowing the band is struggling, she hopes to use her make-up skills to reinvent their image, but when a member of the crew drops out, Amber finds herself asked to contribute in a different way – in the form of heated sexual conversations with hot lead singer Cassian Marsh to put him in top form before every concert.

Despite her past, Amber is unable to resist Cassian’s charm and raw energy, and enjoys knowing she can drive him wild with just her voice – but their increasingly passionate meetings leave her longing for more. Can she move past the betrayal she suffered – and can she convince a man as commitment-phobic as Cassian to break his no-dating rule and let her into his heart?

Posted by Tanith Davenport at 00:38 No comments:

Something lucky that happened to me

This topic from Long and Short Reviews was a tough one. My first thought was about winning something, and to be honest I am not a person who wins things. I once won a prize in a bingo game for being the only person in the room not to have had a single number called off their ticket, so needless to say I am not a "lucky" person.

I did manage to win a prize a few months ago which was pretty impressive - it involved a free trip to Go Ape, a year's free bus travel in Yorkshire and a £100 bar tab at a bar in Otley. I haven't bothered with the Go Ape voucher, but I can't complain about the bus pass or the afternoon we spent getting drunk on orange wine.

Other than that, the only thing I can think of as lucky is my writing. I have had the good fortune to be published by publishers who love my writing and who recently offered me a three-book deal. The first in the series, Hyperventilating, will be out on 21st June and I can't wait to unleash it on the world.

In fact, I have a partial cover to reveal today.

So what lucky things have happened to you?

Posted by Tanith Davenport at 00:44 4 comments:

This topic from Long and Short Reviews was a tough one. I read a lot of historicals which, much as I enjoy them, don't tend to be settings I would actually want to visit. The royal court may have been attractive in Henry VIII's time but you could still catch a raging case of the sweat.

The setting I eventually came up with was from a short story of Isaac Asimov's called "Gold".

Why? It's set in a time where films can be made using perfect CGI and heavy subliminal imagery to add depth to the performance. In the first half of the story our lead character is working on the perfect version of "King Lear". I would absolutely value being able to experience Shakespeare in an era where filmed performances could be enhanced that way.

Posted by Tanith Davenport at 23:03 6 comments: