My new short "Echoes of Love" is now out on full release for just 99p!

This was a great story to write, and as with every story I had a playlist in my head. I've often wished I could release stories with music attached - "Play track 3 at the start of chapter 2." But since that's not possible, here's the playlist I used for "Echoes of Love".

1) "My Best Friend's Brother" - Victoria Justice. Cheesy teen track which for me summed up a lot of what Kala felt when she first met Tor and was reluctant to get involved with him for fear of upsetting Vika.

2) "Break Me Shake Me" - Savage Garden. One of my favourite tracks for sex scenes - passionate and heart-pounding, which suits Kala's first brief encounter with Tor as well as her later ones.

3) "Dreamtime" - Ralph McTell. A slower, more mystical one for a bit of a mental break, but also suiting Kala's love of the paranormal and the mystery behind it.

4) "Ghost" - Ella Henderson. Both figurative and literal in its description of the vardoger.

5) "I'll Be There For You" - The Rembrandts. As the story develops we discover the secret Vika carries; this song represents Kala's desire to help her and be there for her in difficult times. 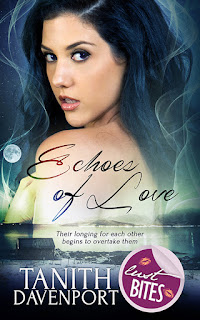 Paranormal writer Kala Westenra, staying with her best friend Vika in Norway, is hunting for a new subject for an article, and finds it when she hears footsteps in the hall twenty minutes before Vika's hot brother Tor Viitanen arrives home. This, Vika tells her, is the vardoger - a Norwegian ghost, a future echo which always precedes a person's arrival.

Kala plans to stake out the hallway to catch the vardoger in the act - and is shocked when, on its arrival, it kisses her. Her feelings for Tor have been hidden ever since she first met him two years ago; could it be that the vardoger is acting on Tor's secret desire for her?

As Kala and Tor work together to understand what is happening with the spirit, their longing for each other begins to overtake them - but the vardoger has more to show them than they expected...