Favourite book series and why

I had to think a bit about this topic from Long and Short Reviews. What book series do I actually read? I've read quite a few YA dystopian series but wouldn't consider most of them to be among the best I've read - I always had some sort of problem with them.

The first series I could think of was Philippa Gregory's Tudor series. I don't think any of them are as good as "The Other Boleyn Girl", but I love that period in history (and I am aware there are disagreements as to the accuracy of Gregory's books) and I felt like she made the period come alive. It takes a lot to make me interested in Anne Boleyn after having read a dozen different versions of her story.

Similarly I loves Suzannah Dunn's series of Tudor novels. Written in a more modern style, they capture the mood well without getting caught up in language.

Isaac Asimov's Foundation series is always a favourite. I always admire people who can write good science fiction, since I love the idea of complex world-building but never have the nerve to try it myself.

And I couldn't leave it without mentioning one of my own. My trilogy "I Heard Your Voice", "Tamar Rising" and the upcoming "Spiritwalker" were some of my favourite stories to write. I love writing paranormal romance, and paranormal investigator Tamar Steele was an amazing character.

So which series have you loved and why?
Posted by Tanith Davenport at 23:30 22 comments:

Favourite things to do in the spring

Ah, if only we'd known, when this topic from Long and Short Reviews initially came up, that we'd be spending the spring behind closed doors. At least, I am. As of today the UK is on lockdown, I'm working from home and not setting foot outside except to go to the supermarket or pharmacist.

So it's a little unfortunate that one of my favourite things to do in the spring is go to nature reserves, because that won't be happening this year. 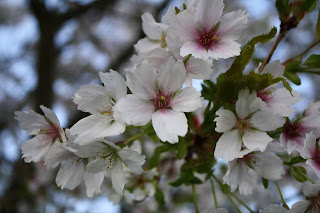 I also had hopes to go back to Alnwick to see the cherry blossoms, but again, that's closed.

What else do I like to do in the spring? Well, the nights are lighter but the weather is still cold, so I also like to go to the cinema and visit new restaurants. Again, not much chance of that at the moment.

So my plans this year are to watch as many films at home as I can, read a lot of books, and drink a lot of Mojitos. May as well enjoy being inside!

So what are your favourite things to do in the spring?
Posted by Tanith Davenport at 00:31 20 comments:

The weirdest thing I learned while reading

I had to twist this topic by Long and Short Reviews, because I honestly couldn't think of anything weird I had learned by reading fiction. I tend never to assume that weird things I read in fiction are true. So I came up with one weird thing from non-fiction and two from researching my own writing.

Otters play. I was a great lover of Gavin Maxwell's "Ring of Bright Water" and was fascinated to discover that otters are playful animals, spending hours tossing rocks around for sport. He also described that when playing fetch with an otter, it is the otter that throws the ball and the human who fetches it.

What happens if you squeeze a full can of drink. I had a scene in "The Hand He Dealt" with Ash squeezing his can of beer in shock and spraying it all over his girlfriend. My husband insisted the beer would simply run down the sides. So we filled a can with water, my husband stood in the shower and squeezed it. The resulting jet of water hit the ceiling, proving my point entirely.

You can pin someone to a tree with a spear. I haven't actually used this one yet, but my husband likes to remind me of it as a weird question I once asked him. Although apparently you'd be better using a pike. A spear is for throwing.

So what weird things have you learned while reading?
Posted by Tanith Davenport at 23:19 22 comments:

One skill I wish I had but don't

The main problem I had with this topic from Long and Short Reviews was narrowing it down. I can think of plenty of things I wish I could do and can't, many of which I've attempted and failed miserably at. I did, however, manage to get it down to three.

Songwriting. As a moody teenager I spent a lot of time trying to write songs. I wasn't as bad with the lyrics as I was with the music - I can't play any musical instruments, so was stuck trying to pick out notes on a keyboard - but, looking back, they were angsty, badly rhymed nonsense. As was demonstrated when I showed one to an ex and his response was "Well... you've certainly put a lot of effort into it, anyway."

Dancing. I can just about stick to a beat, but that's it. As a child I wanted to be in stage musicals, but while I could act and sing quite well, I can't remember a dance routine for the life of me. I also have no balance or elasticity - I can't even do a high kick.

Rock singing. I haven't sung in years, but I used to be a classically trained singer. The snag with that is that, while I could manage classical songs and some musical theatre, I couldn't do pop (apart from LeAnn Rimes) and really couldn't do rock, which I love. My singing teacher thought I'd be even unhappier if it was the other way round, and maybe she was right.

So what skill do you wish you had?
Posted by Tanith Davenport at 23:19 16 comments:

Characters who remind me of myself and why

Long and Short Reviews always comes up with interesting topics, and this one was particularly thought-provoking. Even when I write characters myself they're never that close to me, although we may share some characteristics. So I gave it some thought and managed to come up with three possibilties.

"Rebecca" - Mrs de Winter. The nameless Mrs de Winter suffers in the shadow of her husband's first wife, the charming Rebecca, but starts to come into her own as the novel progresses. I found she resonated well with me as a teenager, as I was also deeply introverted and often thought I wasn't good enough alongside my more confident friends.

Laura Ingalls. Okay, I accept that she wasn't technically a character since the books were semi-autobiographical, but the imaginative and determined Laura was someone I could easily identify with, much more than her pretty and goody-two-shoes sister Mary.

"I Heard Your Voice" - Tamar Steele. I couldn't let this one pass without one of mine. Tamar is probably the closest of my characters to me, with her fascination with the paranormal and determination to make her own way in the world.

And I'm happy to announce that Tamar will be returning in another story, "Spiritwalker", which will be on general release from Totally Bound on 20th October.

So which characters remind you of yourself?