Characters I Want to Meet

The main problem I had with this topic from Long and Short Reviews’ blog hop was narrowing it down. Nearly every time I read a good book I find a character I want to meet.

However, the first time I can remember feeling this way was when I read the Foundation series by Isaac Asimov. Hari Seldon, the inventor of psychohistory, is a highly intelligent and also highly charismatic character, able to present a fascinating area of study in an interesting way. I particularly enjoyed him in Prelude to Foundation, where he is shown as a young man, ably fighting off attackers with martial arts and charming Dors Venabili, the woman who would become his wife.

My favourite female characters, on the other hand, are Cassandra Mortmain and Emma Woodhouse. Cassandra, of I Capture the Castle, is a writer and acute observer of people, capable of feeling intensely while also flawed enough to make her human. And Emma, of Jane Austen fame, is equally flawed but also equally witty and intelligent. I love watching her try to matchmake other people while being blissfully unaware of her own heart.

Of course, as a writer myself, I often find myself writing characters I want to meet. So I’ll finish off with my favourite hero Ash Drake from The Hand He Dealt. 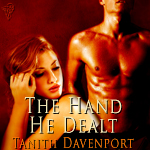 Tall, blond and athletic, Ash initially presents as a stereotypical meathead, a college football player who knows his way around women. But as my heroine Astra gets to know him, she finds a passionate and exciting man underneath.

Posted by Tanith Davenport at 23:39