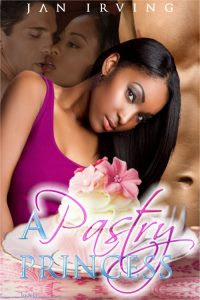 By the time I wrote A Pastry Princess, I had written a lot of m/m and one m/f romance so I was burning to try ménage. I’d had a sexy idea for a couple of years and I was ready to head into ménage waters. First, I sought out some bestselling ménage stories and read them to see how authors handled them. Still, it didn’t prepare me for the challenge of figuring out how to tell the story of three people falling in love. Ménage seemed like a jigsaw puzzle with too many pieces.

So I went back to basics, which was my people.

Seri, my heroine, has cut herself off from the sensual side of life. She is a business woman and an expert baker. When she was left orphaned as a young girl, she took refuge in the kitchens. She made herself into a kind of Cinderella, except in her case, she’s very comfortable living her life in the shadows.

When dangerous Tahir and golden Ismet are given to her as her personal slaves so she can continue her line, Seri has difficulty getting her brain around it—Suddenly she has two husbands, gorgeous, independent alpha males, and all three have to create a baby together in a year.

Despite the futuristic setting and hot erotic scenes, I was writing an old-fashioned marriage-of-convenience. When I figured out that was the heart of the story, it began to fall into place. It helped that creating a sudden family was as alien to my people as it was to me. Tahir doesn’t want to fall in love with anyone. He has trouble articulating his tender feelings to Ismet, whom he took as a concubine before they were enslaved. Ismet is used to hiding his deepest feelings because as beautiful and alluring as he is as a love slave, he’s sure that he’s no more than a pretty body. And when Seri enters the mix she has no idea where she will fit in. She wants to be a single gal, but now she has to make room for two pushy men in her life.

Excerpt from A Pastry Princess:

Something clattered to the floor in her bedroom, and she jerked free of Ismet, striding for her room. What she saw was the tangled dark pink tulle from a new dress that she loved --but hadn’t been daring enough to wear yet --crumpled on her bed. There were high-heeled shoes, boots and sandals and handbags scattered everywhere, as if her neat closet had exploded accessories.

Staring in horror, Seri demanded, “What are you doing?” She snatched her favorite new bag from Tahir’s grasp. It was leather, embossed with a desert scene of camels and palm trees. She’d loved it and couldn’t resist it on a recent trip to the marketplace, though she didn’t need any new bags. They were her weakness.

“No one needs this many shoes,” he said flatly, as if it should be totally clear.

“What?” She looked over her shoulder at Ismet, who had followed them into her bedroom. “What?”

Ismet raised his hands, approaching Tahir like he would an unpredictable and dangerous animal. Which he was, as far as Seri was concerned. She picked up more of her shoes, holding them against her belly protectively.

Tahir looked unruffled. More shoes joined the growing pile in a clunk. He dusted off his hands and looked vaguely satisfied. “You have too many shoes. Your apartment is too small to contain them. We can recycle these.”

Seri threw a shoe at him.

Tahir ducked, and the pink confection left a dent in her smart wall until it stretched itself smooth again. He snared her wrist before she could throw another one at him, holding both of her hands with that ruthless brand of gentleness that made a shiver move down her spine.

“Don’t touch my things. This is my room and --” There weren’t words for the magnitude of his offense. If she could have gotten her hand free, she’d have clobbered him with another shoe.

He laughed and then stopped abruptly, staring at her as if he was startled. “You stood up to me.”

“Tahir…” Ismet’s voice was exasperated. “Haven’t we talked about being nice? Don’t try to throw out a woman’s shoes.”

“Just don’t.” Ismet had moved up behind the larger man. His arms curved around him and he put his head on Tahir’s shoulder, obviously sugaring him up. It annoyed Seri because she wasn’t going to do that to get the big clod to behave in a civilized fashion. But it also made her uncomfortably aware of the intimacy between them again, making her cheeks heat so she had to look away.

“But our woman isn’t being logical.”

Ismet’s lips curved. “No.” He lifted up and kissed Tahir gently.

***
Serafina Blair was the joke of the court -- the pastry princess -- a chubby mouse with an unfashionable interest in shopkeeping.

But despite that, she triumphs, opening a second franchise to her successful pastry store. Queen Helena ‘rewards’ her by giving her two virile warriors as her servants: Ismet, with long gilt hair and golden eyes, and dark and moody Tahir, a desert chieftain. This mating-of-convenience is to ensure Seri’s line continues -- as if she cares about that!

Soon innocent Seri wonders if it is she who will ultimately belong to her two men, masters in the art of pleasures. Watching them together in love-play, more and more she wants to touch them, to be with them. And just when they've begun to conquer the challenges of Seri's innocence, the three must test their unlikely alliance against a common enemy, returning to a primitive world where Seri’s courage -- and Ismet and Tahir’s love for their lady -- will be tested.

And you can find me here: www.janirvingwrites.com

Posted by Tanith Davenport at 06:32