The last place I travelled to and why

This topic from Long and Short Reviews made me smile.

Ah, travel. After so many weeks in lockdown I feel like I've forgotten what that's like. I haven't gone further than the supermarket lately, and my holiday was of course cancelled. So where was the last place I travelled to? 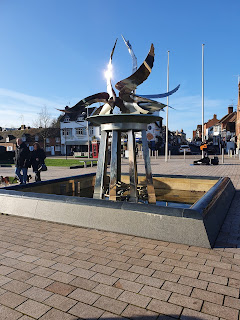 It's one of my ambitions to see every Shakespeare play in the theatre at least once, and where would be better than the Royal Shakespeare Theatre? So I drove four and a half hours (I can see Americans laughing at my thinking that that's a long way) to Stratford-upon-Avon to see King John.

It was an amazing play, despite being seated next to a man who put his legs in two different counties, and Stratford is a beautiful town. I got there early so had plenty of time to look around and relax in the park.

So where was the last place you travelled to?
Posted by Tanith Davenport at 00:06