GUEST BLOG: The Cowboy and the Vampire

Today I'm hosting Clark Hays and Kathleen McFall, whose new novel The Cowboy and the Vampire is a fascinating retake on the vampire and western genres.

Most nights and every weekend we hold séances. We channel the spirits of the undead, the never born and various lost and unformed souls swimming through the ether anxious to be made flesh.

There’s no flickering candles, no table rapping and — usually — no emanations of ectoplasm. There’s just two people, dueling computers at 20 paces and a lot of automatic writing as we compel a host of characters to inhabit our bodies and guide our fingers and record the lives they wish they could live.

Help us, oh spirit guides
We’re writers, not spiritualists, but sometimes the two feel similar. We certainly strive to disorder our senses, disassociate ourselves from reality and diverge from the plane of existence. About ten years ago, we wrote The Cowboy and the Vampire together. It was a magical experience that came almost too easily. The passion of our own romantic entanglement brought the two main characters to life and an otherworldly energy kept the words flowing. In the space of a short year, we had fallen in love, written a book together and it was published by Llewellyn. The future we wanted was not in the tarot cards, however, and it seemed the literary spirit guides abandoned us as life got in the way.

Fast forward a decade. TCATV was rereleased by Midnight Ink thanks to the current interest in Vampires (thank you Twilight, True Blood and Vampire Diaries!) and just like that, the magic returned. We are editing the sequel — Blood and Whiskey — and thankfully rekindling our trips to the other side to meet characters and pull them back with us.

We both write professionally as well (Kathleen works in communications for a medical university, Clark for a national financial services company), but not much occult magic is required to bring a press release to life or translate quarterly earnings into the human tongue. We make up for it at night though when the shadows are long and eldritch energies flow and we ask our fictional characters to briefly inhabit our physical forms.

The world is a warehouse of personality parts
Creating characters from scratch and sustaining them for the length of a novel requires building new worlds — the world they would see. We all move through mostly the same planes of time and space, but we each experience it differently, sometime vastly differently. Fictional characters do the same. We spend our creative writing time purposefully disconnecting our senses and plugging them into the brains of the not yet undeparted.

To do that successfully, we also have to develop lives and loves and back stories rich enough and complex enough to yield consistent motivations and behaviors out of a swirling mass of possibilities. It’s equal parts observation and creation. That’s why we constantly watch those around us and capture their actions and quirks, storing the bits and pieces away in a warehouse of spare parts from which new lives can be assembled and animated.

Springing forth from somethingness
The two main characters in TCATV — Tucker and Lizzie — were assembled from the very best parts of our own lives as we fell madly and passionately in love. Onto that framework, we built new characteristics (some we probably wish we had and others, the small and petty parts, we have in abundance). Other characters were loosely based on real people. Lenny, the survivalist, paranoid conspiracy theorist and improvised weapons expert, was modeled on someone Clark grew up with only all of his tendencies were supercharged to the farthest extremes.

The Vampires are different, of course. Their motivations are (somewhat) foreign because they are predators. We researched works of biology to understand the motivations of the big predators, and spliced that with philosophical and neurological works to help us understand the basis of cruelty. Elita, a sexy, sultry and joyously amoral creature of the night, is perhaps our greatest creation with allegiances that shift on a whim, a cruel streak wider than New York alleyway and insatiable sexual appetites.

In Blood and Whiskey, we have a host of new characters, all of whom have detailed histories — a daunting prospect for Vampires that have lived for centuries. We know how they take their coffee (or vodka), who their first lover was (or first kill) and, most importantly, how they would interact with others. Will the same magic be there for Blood and Whiskey? All signs point to yes.

Developing successful characters really is magical and a little disorienting. Imagine a medium channeling a spirit with multiple personality disorder. For a couple that writes together as one voice, it’s even more confusing. First, we have to let our minds come together — never an easy task — before we can derange our senses enough to let the visitors inside. And some of them aren’t very nice.

Luckily, Lizzie and Tucker have a love strong enough to overcome just about anything. Happily, so do we, in our real lives. At least we do now. There was a time when we were sorely tested … and didn’t speak to one another for more than a year.

But clearly we stayed in contact somehow. Perhaps remotely across the astral.

About the authors
Kathleen McFall was born and raised in Washington, DC, and her experiences there, from protests and riots to hanging out in the corridors of the Supreme Court and wandering around the Capitol, filled her sense of place with history and granite. A geologist by training, she excelled in technical writing, translating complex scientific papers into engaging articles. Those skills are now focused on paranormal fiction. An avid reader, she spends every spare moment working with Clark Hays on their next book — Blood and Whiskey — and channeling spirits, usually in the form of vodka martinis.

Clark Hays was born in Texas, grew up in Scotland and then Montana where he was raised on a working ranch and did all the expected cowboy things — riding, roping, hunting, branding cattle and communing with the spirit of nature. The openness of the landscape and the solitude (the nearest neighbor was five miles away, the nearest town – 2,500 people – was 30 miles away) provided a constant source of inspiration, very little distractions and a chance to really be alone with his thoughts. In this solitude, he found his calling — writing — early. When he’s not writing, he’s reading everything from graphic novels to Ouija boards.

About the book:
The Cowboy and the Vampire

brings together two of the most iconic characters — cowboys and vampires — and crashes them together in a story about love, culture clash and, of course, evil plans to take over the world. We’ve thrown in a healthy dose of laugh-out-loud humor, a rich portrayal of life in the modern West and fresh new take on the Vampire myth (religion meets evolutionary biology). 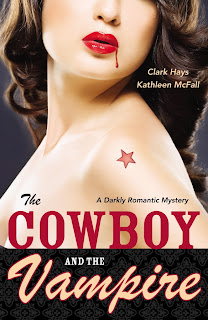 Reporter Lizzie Vaughan doesn’t realize it, but she has 2,000 years of royal Vampiric blood coursing through her veins. Neither she nor Tucker, her cowboy lover, has any idea that Julius, the leader of the undead, has a diabolical plan to reign over darkness for all eternity—with Lizzie at his side.

Lizzie battles for her life—and her soul—as she and Tucker find themselves caught up in a vampire war, pursued by hordes of Julius’ maniacal, bloodthirsty followers.

Who will be left standing when the sun rises?

Learn more:
www.cowboyandvampire.com
www.facebook.com/cowboyandvampire
And check out the novella Red Winter, by Clark Hays, edited by Kathleen McFall, released as an ebook in August.

Giveaways include 1 signed first edition of the original publication from 1999 and 5 signed copies of the current paperback edition.

Open to US Shipping.


Winners will be chosen from all ofthose who enter via the form,


leave comments at each tour stop for bonus entries


you can also enter at each tour stop

Posted by Tanith Davenport at 04:56